Our seashore forage and clam bake on the flaggy shore near New Quay last Sunday proved to be a very informative day, which was led by a team of experts in the field of Aquaculture. Barbara Buckley, (Lecturer in Aquatic Biology at GMIT for 37 years, was given the very fitting role in organising this event and boy did she deliver!!
Barbara’s experience in Aquatic Biology is a valuable tool in foraging on the seashore. She also has skills in foraging other plant & fungal species. She has assisted Louis Smith in our now annual mushroom hunt in Petersburg. To start the event off, Barbara showed us a display of seaweeds and gave us an informative introduction to the most popular seaweeds which can be found on our shores, which served as a good basis for our Seashore Forage to follow. 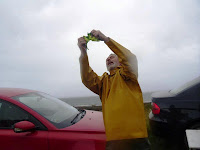 Iarfhlaith Connellan from nearby Redbank Hatchery was very generous with his time and gave us a well-informed talk on the harvesting and processing of the various seaweeds, in which he himself is involved. Harvesting of seaweed in Ireland is becoming big business according to the Marine Institute. They have estimated that this, although a relatively small niche market, would yield around €20m in output by 2013.
In a BIM report on the Development of Seaweed Aquaculture in Ireland, it is pointed out that agricultural and horticultural products are the most important by volume and value. A small proportion of the national production goes into various cosmetics and therapies. This sector yields disproportionally high revenue against the volume of seaweed used (Walsh & Watson, 2007). This is good news also for our next speaker: Evan Talty from Wild Irish Sea Veg (www.wildirishseaveg.com). Evan’s family founded the company in 2009 and since then, has produced hand harvested sustainable sea veg produce. Evan was on hand to talk about the various types of sea veg and the various products that they produce. We were treated to tasty nibbles, such as seaweed crisps (yes! watch out Tayto!), and various flavoured jellies made out of carrageen moss. These tasted very good. With these three experts on hand, the team of Slow Foodies were led out to the shore to forage for seaweed. Our foragers had various uses for the crop they were about to forage. One person wanted seaweed to bathe in as she has skin allergies. Another person wanted seaweed to use as fertilizer for her garden, and seeing that there were a lot of chefs in the group, I can bet there was a lot of seaweed on the menus in Galway that evening. 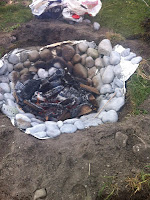 Meanwhile back at the camp….Cobie, Cáit
& Ulrich were preparing for our much anticipated Seafood bake, which played a central role to the communal feast that awaited us! It is no mean feat to try and keep a fire going long enough to heat the stones to prepare them for the cooking under seaweed, the selected shellfish and fish. Well done, guys.

With the cold north Atlantic wind now blowing through us, the foragers arrived back from their hunt to be served a much welcomed bowl of delicious chowder, cooked al fresco by Ulrich Hoeche. An enthusiastic forager himself he treated us also to an array of pickled seaweed (Recipe Section). 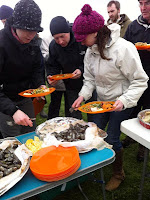 After our chowder, it was time to sample the tasty shellfish and fish that had been baked in the pit. This was accompanied by a big variety of side dishes some of which featured pickled seaweeds. After this, the various desserts and sweet cakes were served. Thanks goes to Pat and Kate who made sure no one was left hungry. 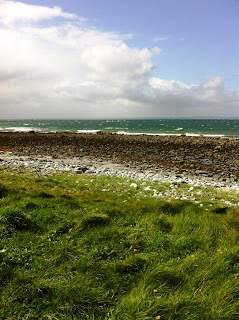 With a successful day behind us, it was time to sit back and take in the breath-taking views across Galway Bay and the Aran Islands. However this picture of blue skies and fluffy white clouds did not depict the day that we had, the sun had decided to come out and play just as I was driving home….Grrrrrr!

A big thank you goes out to Barbara and the team for bringing this successful event together. Thank you. I hope to see you all (members and non-members) at our next event soon.

For Recipes of the event please go to our Recipe Section !!! 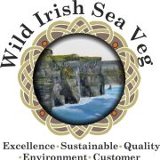