Some photos from Food and Craft Fair at the weekend 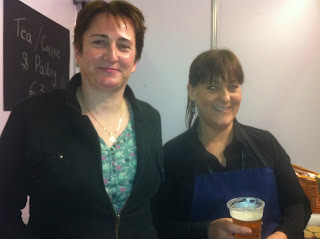 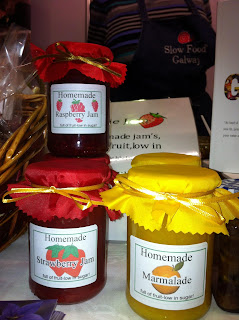 Cobie Den Heyer makes a selection of jams and pickles in these cute beautifull packaged jars, not only do these look pretty, but they also have a high fruit content (72%) , and she also grows all her own fruit and vegetables, You can find Cobie in various markets in Galway & Clare. Cobie can be contacted on 087-7496871 — with Cobie Den Heyer and cobie den heyer at Blackbox Theatre Galway.


Babara Buckley.....where would i be without you this weekend?....your such a trooper, thank you:-)! I cant wait to try your delicious Chilli Jelly. Barbara also produces Old fashioned Marmalade, Various Jams, Spicy Tomato jam (savoury), and much much more. Barbara can be found selling her produce on the moycullen market, on fridays i think ?? — withBarbara Buckley
Posted by Colm at 10:56 No comments:

What a Fantastic turnout at the Local Food & Craft fair which was held over the weekend in the Blackbox theare in Galway. The turnout certainly exceeded our expectations!!!. Slow Food Galway hosted a stand which represented 8 local artisan food pro

ducers from Galway, and almost all of their produce sold :-), I just want to say a big thank you to all those who volunteered a lot of their time in helping out over the weekend...so a big thank you to; Babara Buckley, Richard Nielsen, Kate & Colm O Dwyer, Helen McFarland, Shiela O Driscoll & Liz Nolan for all your hard work. This weekend would not have been possible the organisers....Galway County and City Enterprise Board, so a big thenk you to the girls (Breda, Caroline, Catriona, Caroline etc....) there for organising such a fab event. We will certainly be back next year again!!!, and where would we be without the artisan producers of Galway...Thank you guys for producing such fab produce, Lets do it again next year again. I have a few snapshots of the event along with contact details of the producers that we represented at the event, enjoy....maria :-)