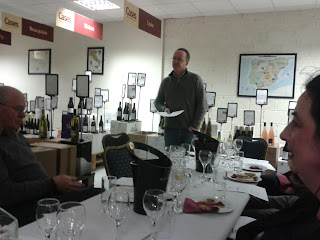 A warehouse in the suburban fringes of Galway seemed an unlikely setting for a Slowfood gathering. But on a a rain soaked Tuesday evening, members trickled through the doors of Cases Wine Warehouse and made their way to two large tables, well adorned with wine glasses. Members mixed, mingled, and nibbled before settling in for the main event.

The event in question was a Slow Wine evening, hosted by proprietor of Cases, Peter Boland. As Peter welcomed everyone, it soon became clear we were in for a treat. In addition to being an authority on wine, Peter is an enthusiastic supporter of the Slow Food movement, and member of the Galway Chapter. Having participated in the recent Foodie Forum, sponsored by GMIT, affirmed his conviction that Galway is on the verge of food revolution. “Slow Food is a very strong trend happening at just the right time,” he said.

During the course of the evening, we tasted six wines, plus a dessert wine. Our tour brought us through a few famous wine regions, like the Loire Valley for an uncharacteristic red wine, Languedoc and several lesser known regions, like Austria, and Mallorca. It was an eclectic mix to be sure, but each of the wines and were lively and full of character.

Strong testimony for the man and his store. Galway is blessed with a bevy of fine wine merchants.  Now five years running, Cases has stood the test of time.   “We opened two months before the official end of the Celtic Tiger,” Boland muses. Back then high end wines were flying out the door. Cases has differentiated itself by purposefully doing things differently.  Organic and biodynamic wines have become something of a speciality for Cases Wine. Their selection is unsurpassed in the West of Ireland. Most of the wines tasted for the Slow Food evening fell into one of these categories, which spurred a vigorous discussion about these categories and the degree of naturalness in the wine world.

Over the course of the evening, participants enjoyed an extended freewheeling conversation about wine.  The wine industry has long enjoyed a green halo: what Boland described as “the myth of being natural.”  In fact many producers are large commercial enterprises, operate a long long way from that perception. Boland lamented the lax content labeling in the industry, pointing to something of a double standard in comparison to the food industry, with its stringent disclosure requirements.

Much of the conversation around the naturalness of wines centers around the use of Sulfites.  A good barometer of naturalness for any given wine is how much sulfites are used in the production. Their use is controversial among purists and a small percent of people who believe to suffer allergic reactions. Yet sulfites are, as Boland described, vital to wine production, by halting fermentation and preserving the product for distribution and cellaring.  Perhaps sulfites have been overused by some of the larger commercial producers, Boland believed. Its an area where organic wines have set themselves apart.  “In general organic wine producers use much less Sulfur Dioxide than conventional wines.” Boland said.

Boland took the topic of natural one step further, introducing Slow Food members to the latest trend in the wine world: Natural Wines. Unlike their more conventional counterparts, natural wines are produced without any added sulfites.  It was a topical conversation, given the recent Irish Times article by wine critic John Wilson, who summarized the case for and against Natural Wine as follows:

“Producers let wine take its own course, with all the attendant risks. They argue that minimal intervention allows the “terroir” or “sense of place” to shine through. Sceptics say the opposite is true, and you are merely tasting faults.”
We learned firsthand the pitfalls of producing with such a purist approach. Boland purposefully opened two bottles from the same case: produced from the same batch, and otherwise identical in every way.  Yet the two bottles we sampled were wildly dissimilar, one was arguably unpleasant to drink. They were the equivalent of free roaming, sandal-clad hippies, following their own free will.  So it was the first casualty of such a purist approach to wine making was consistency. To each their own, but its difficult to imagine why anyone would want to roll the dice on consistency in such a way.

Wrapping up the evening, we congregated at the front of the store to sip and savor a sweet and lively dessert wine. At this stage everyone was in fine form, having staved off the cabin fever and become more savvy to the world of wine. Peter Boland certainly won over several new customers.  By all accounts it was a successful  outing in 2012 for Slow Food Galway.
Posted Todd Parker , Slow Food Galway member
Posted by Colm at 11:56 No comments: