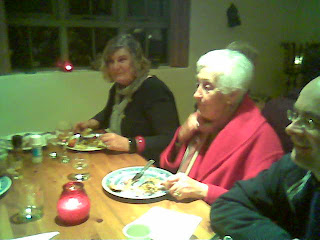 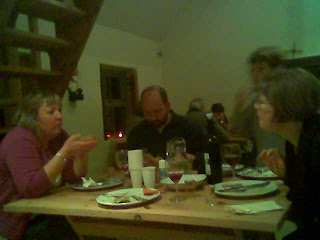 Slow Food Galway “Spirit of Christmas” Event 13th December 2009
A bright day shone for Slow Food Galway’s “Spirit of Christmas” event on Sunday 13th of December. It was held at the Cnoc Suain Cultural Village in an Spidéal and was attended by 22 members.
The event celebrated Terra Madre Day and was one of over 1000 events worldwide marking the 20th anniversary of the international Slow Food Movement.
We were welcomed to Cnoc Suain by Charlie and Dearbhal with a blazing outside brazier and a brew of Cáit’s patented mulled wine. Both were welcome in the bright but decidedly “fresh” conditions!
After adjourning indoors we were served Barbara and Muriel’s soups together with Ann’s brown bread which was the ideal starter for the day. The centrepiece for dinner was a large goose which was the standard Irish Christmas bird before the arrival of the turkey. We also had a baked ham from Colleran’s. We had planned to get a traditional spiced beef from Cork. However, in the spirit of “eating locally”, we got our spiced beef from Colleran’s and Tormey’s. Both were very quite different reflecting each producer’s own distinct recipe.
Various seasonal vegetables were brought by members and included Jerusalem artichokes, roast squash, curried parsnip bake, a vegetarian nut roast and a chick-pea curry.
Desserts contained a lot of spirit with tira misu, chocolate trifle and home-made chocolate truffles.
For the “Spirit” part of the event we had various home brews: red and an elderflower home-made wines, a sloe gin, a sloe poitín, a kiwi spirit. Cobie’s sloe gin appeared to be the most popular of the spirits – it was discovered by accident after maturing for a good many years! The red wine also disappeared very quickly.
All in all, a very enjoyable day and a big thank you to Charlie and Dearbhal for hosting the event.
Kate
Posted by Colm at 20:55