With the sun shining across the Connemara landscape a bevy of local Slowfoodies from all over Galway descended upon McGeough’s butcher shop in Oughterard to ‘Learn about Lamb’. Established by James’s father Eamonn in 1971, we could sense thisbutcher shop is run with huge family pride. 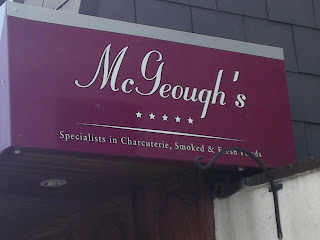 James himself has a masters in Butchery (Germany) and perhaps that is where his love for ‘all meats air dried’ has stemmed from. To start off our afternoon, James invited up to sip on a sampling of wines he had opened, whetting our palates for what would come later. He then proceeded to teach us all about Irish Lamb. 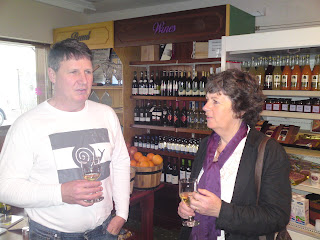 We learned about the differences in local Irish lamb (from other counties like Mayo, where he currently buys from) and local Connemara Lamb which is only ‘in season’ in September! This came as a surprise to most of us, as the assumption was that all lamb was ‘in season’ for spring. 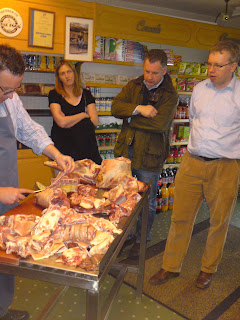 After learning all about the different cuts of lamb, James then took us ‘around back’ to where the afternoon took on a whole new level of interest! James is Butcher of note when it comes to air drying meat in Ireland. His operation is one of the slickest we have seen and certainly the cleanest. He walked us through his production line sharing with us the process of how he and his team handle each product from start to finish. Everything from the boot scrub machine at the main entrance, to the exact temperature of the water for cleanup all the way to the musty meat smell that greeted us as we gazed in awe at his hanging hams, and little lambs. Thanks James!
What a day of learning! Anyone hungry? 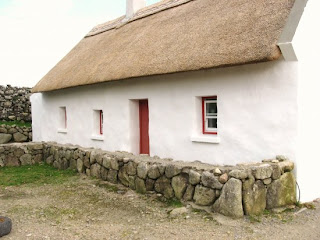 Dinner with a slice of Irish Culture Pie followed immediatley at the lovely and serene site of Cnoc Suain. Some may think that Dearbhaill Standún and her husband Charlie Troy were mad to attempt what they have wholeheartedly accomplished when they took on the dream of Cnoc Suain. The warmth and welcome we were received with when we descended upon this historic hill village to sample some local lamb dishes (prepared by two local chef’s) was only a continuation of what was turning out to be one of the most enjoyable SlowFood events we have had. With welcoming personalities and Dearbhaill’s gift for story telling, we learned the story about Cnoc Suain (Restful Hill) and how it is fast becoming a most popular haven as a Centre for Cultural and Natural Heritage. With a passion for landscape and culture so evident, this exudes what Connemara is to us Galway folk!

With each SlowFood member (and guests) toting along a covered dish of one of their favourite recipes, we were set up to have the most delectable evening. James McGeough had donated a stuffed and rolled breast of lamb and a leg of Lamb from County Mayo as he does not have access to Connemara Lamb until September. SlowFoodie, grower and Editor of Organic Matters Magazine, Cáit Curran had located a leg of ‘hill lamb’ from a friendly famer by the name of John Molloy, in Clonbur, County Galway who graciously donated a ‘local leg’ to sample! A smattering of baked fennel, roasted red cabbage with lamb jus and a winter vegetable casserole rounded off our dinner with plenty of crusty bread from one of our favourite bakery’s—The Gourmet Tart, Galway.
The consensus was unanimous. We could only determine the fact that both Lamb dishes tasted divine! Although there was ample amounts of wine on hand for those that did not have to drive home, there was an urgency to get the licked clean plates cleared so we could launch an attack on the sweet stashes that were waiting on the sideboard in the dining room at Cnoc Suain. With the aroma of coffee flooding the room we wrapped up the evening nicely with some amazing treats. An Organic Pear Crumble, Coconut Buttermilk Cake, Orange Almond Flourless Cake and locally sourced Rhubarb Crumble.
After each person ate every piece of dessert on offer, Charlie Troy offered to give a little tour of Cnoc Suain. A little stretch of the legs around this enchanted hill village with the sun setting along the Connemara skyline was the best way imaginable to wrap up this wonderful day.
Thank you, Dearbhaill and Charlie of Cnoc Suain. See you in November!

Posted by WiseMóna at 11:37 No comments: